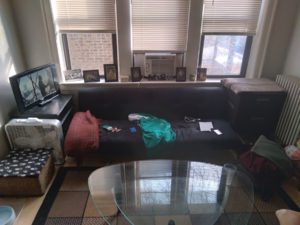 Here’s our latest LERN heroine story. So this rich kid left his flute, which is valued at $22,000, on the subway in Chicago. A homeless guy in his thirties found it, took it to a pawn shop. The pawn shop owner recognized it, because the story of the lost flute was in all the media, and called the rich music student.

The homeless guy asked for a reward of $500, and the rich kid refused. The New York Times vilified the homeless kid, Lucas, in a front page story. So millions of people read about it.

Then some people around the country set up a GoFundMe for the homeless young man. They raised $15,000. But Lucas had no money to set up a bank account and access the money, so he tweeted that. LERN’s Julie Coates texted him to send him the money. “You want it sent Western Union, right?” Julie asked. “How did you know?” Lucas replied. “This ain’t my first rodeo,” responded Julie, as she has helped other homeless people before.

So Julie sends the money to set up a bank account, and pay for one night’s lodging to get him warm for the night. Lucas and his girlfriend, also named Julie, know it’s a risk- – some people would just spend the money on alcohol or drugs. So he appreciates it so much.

Lucas spent the whole amount of GoFundMe on a year’s lease on an apartment, so he and his girlfriend wouldn’t be homeless anymore. Photo: Lucas’ new apartment. Then he went out and, now that he has an address, got a job. Lucas and Julie stay in touch. Our LERN feel good story of the month.